Squad comparison with the sides around us 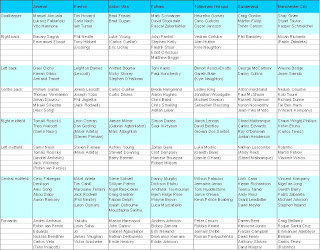 Looking at the teams likely to finish around us (notice I’m leaving out West Ham), our squad looks pretty strong.
Left back, left midfield and central midfield are the weakest areas, but we’re not the only ones with weakneses – Villa badly need centre backs, Fulham lack quality back-up options right across their midfield, Sunderland look short defensively, and Arsenal have the same old problem – a lack of muscle and grit throughout their squad.

For what it’s worth, my prediction would be:

That would be some achievement for Sunderland, but I rate Bruce highly as a manager, and I think he may have a couple of transfer aces up his sleeve.