Analysis of the goals conceded vs Man Utd

United play some cracking football, no doubt about that. Even their “second string” are capable of some slick play – one and two touch, sharp, plenty of movement – it’s hard to defend against, but you’ve got to at least have a go.

The move for the first goal develops down United’s left – Hutton goes with Park, who nudges the ball to Anderson. Hutton does the sensible thing, and goes with Park. Notice Palacios with Wellbeck (covering for Dawson, who’s gone out to meet Anderson), Bassong furthest right, and Jenas taking up a decent position too. 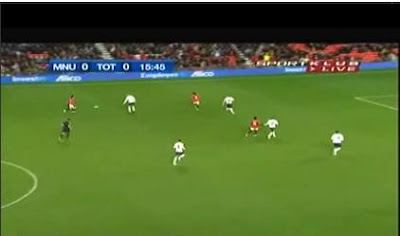 Anderson has dragged Dawson away from the box, and gets past him very easily. Bentley is our player furthest left in the shot below, and he comes to make a challenge. At this point, Gibson comes into shot in acres of space. 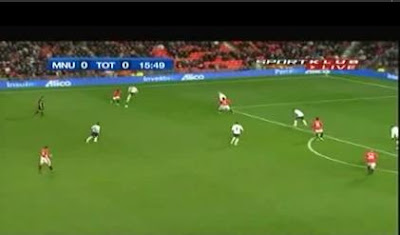 Technically, Gibson is Palacios’ man, but Palacios has tracked Wellbeck. Jenas and Palacios would be reasonably positioned if Lennon or Bale had seen the danger and come to cover. 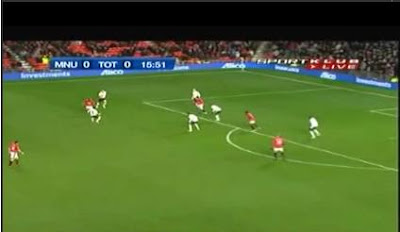 When the ball finds it’s way to Gibson, Jenas and Bassong are left with a lot to do. Gibson lets the ball run across his body, virtually taking Jenas out of the game. 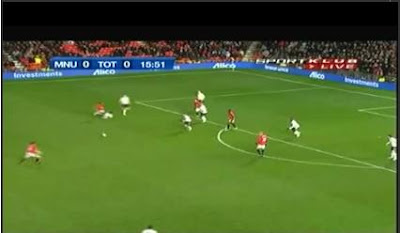 You can see just how much room he has from the shot below.

Also notice Lennon and Bale – caught out with the quick switch from right to centre. Our players have been dragged around, and there’s a lack of cover – I guess it doesn’t help that this eleven are not used to playing together. 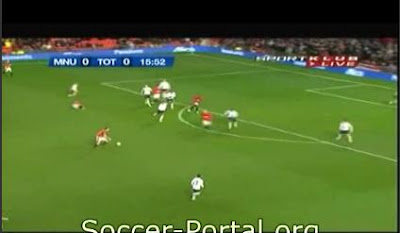 Bale’s position is too wide to allow him to defend the situation, Bassong has made up ground, but not enough, and Gomes is giving Gibson quite a lot of the goal to aim at, encouraging him to shoot across goal.

Make your own mind up as to whether Gomes should have done better.

Another poor team goal to give away.

The move starts with Park (what a cracking little player he is) again. He plays the ball forward, between Palacios and Hutton, to Wellbeck.

Palacios at this point is caught ball-watching (see previous blog posts for more examples of this!). Gibson in this shot is alongside him.

By the time Wellbeck has slipped the ball back to Park, Gibson has gained a ridiculous amount of ground, and is now well ahead of Palacios. It’s 4 against 4.

Berbatov has drawn Bassong out and, in true Berbatov style, he turns out, and picks out a colleague who can now really “get at” the defence, with one of the centre backs out of the equation.

Also notice Palacios again – he’s got back goal-side of Gibson, but, strangely, is standing off him. 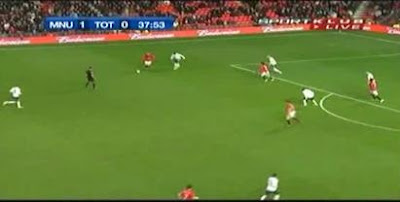 You can’t see it so well in the pictures, but in the highlights video, you can see Palacios ball-watching yet again, and Gibson losing him with a change of direction.

Gibson receives the ball, and plays around Palacios through a neat one-two with Wellbeck.

It’s a really lovely finish from Gibson, but is another avoidable goal – you simply have to keep switched on against teams that pass the ball as quickly and accurately as United do.