Spurs recall Andros Townsend… but who is he? 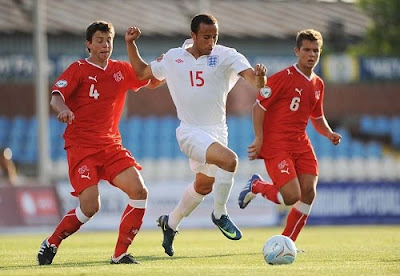 Spurs have recalled a second loan player ahead of Saturday’s FA Cup tie with Fulham, as injury problems mount.

After Redknapp announced that Jermain Defoe was a doubt through injury, it took our projected injury tally to eight (Lennon, Bentley, Huddlestone, Jenas, Woodgate, Cudicini, Defoe, King), and so Andros Townsend has been recalled from MK Dons.

An England U19 international, Andros has had previous involvement with the first team squad, having joined them on their pre-season tour of Spain lat year, under Juande Ramos. He was actually used as an attacking full-back by Ramos, but his best position, without doubt, is on the left wing.

Having impressed in 10 games on-loan at Yeovil Town last season, he moved to Leyton Orient this year, where he made 17 league starts, and also came off the bench five times. Rather unexpectedly, he was recalled, and then sent to MK Dons, who are hoping to be promoted this year. He was a sub in his first game (as he hadn’t had a chance to train with the team) but has since been involved in every game that he has been available for, and Ince has spoken very highly of him.

As with Livermore, some of my previous articles cover updates on his progress (Spurs loanee update 11/02/10 and Spurs loanee update 17/01/10 for example). Some comments worth noting from the MK Dons Official Site report of their game against Tranmere:


“From the first moment the on-loan Spurs teenager touched the ball, the Dons fans were swooning – in raptures at the pace with which he carried the ball, fearless in his quest to embarrass defenders.

So when the 18-year-old carved through Shaleum Logan and Paul McLaren on the left flank to set up the opening goal just six minutes in, the Cowshed must have been expecting a field day.

It was the game’s outstanding moment – Logan and McLaren left standing as Townsend burst between them, before cutting back the most inviting of drilled crosses. Pinged back at shin-height, it was a gift for any player with the technique to finish it and Puncheon, with the deft touch of Roger Federer proportions, sweetly swept it home on the half-volley.

Townsend fired just past the post after exchanging passes with Jermaine Easter in the 24th minute, but the visitors, who had consolidated admirably, went close with a long-range John Welsh effort.

Townsend went close to a debut goal with 15 minutes to go when he curled onto the roof of the net after good work from substitute Jude Stirling, on to replace the injured Danny Woodards in the first half.

And some high praise from Paul Ince after his debut:

Townsend’s impact was considerable on the stadiummk faithful, who rose to their feet time and again to applaud his dynamic wing play.

And Ince said the teenager set an example for his established players with his approach in the first half.

He added: “He was the only one in the first half, along with (Mathias) Doumbe, who looked like they wanted to be out there.

“It’s not right for me to go in at half-time and tell my players that the only one out there is an 18-year-old kid.

“That’s a lesson to us, but he exceptional, not just going forward but defensively as well. He’s slotted in superbly.”

I’d imagine that, barring further injuies, we’ll line up as follows for this game:

Still a relatively strong first eleven, but our bench is pretty flimsy.