With the positive news that Michael Dawson, Tom Huddlestone, Vedran Corluka, Ledley King and Jermaine Jenas could all be fit for selection, Harry Redknapp has some big decisions to make ahead of the FA Cup semi-final with Portsmouth tomorrow.

Should he keep Wednesday’s game in mind? For me, he needs to pick his best side, rather than preempt who may or may not be fit for Wednesday.

We know that Woodgate is injured, and that Kaboul and Walker are ineligible. Potentially, though, we could be able to choose what is, in my opinion, our best back four:

We badly missed Michael Dawson at Sunderland last week, and it would be great to see him back, be it alongside King or Bassong. Corluka is also absolutely vital, particularly as the only eligible right-back currently at the club.

I would be very disappointed to see Modric playing centrally again, for two reasons:

1. He is not good enough defensively.
2. He is restricted offensively.

We know that Modric likes to wander and, in Palacios, we have a player that covers ground all over the pitch, rather than holding in his position. Were we to have a Carrick type player, I think Modric could possibly do a job in the centre, but we don’t, and I don’t want to see our central midfield overrun like it has been at times over recent weeks.

In his free-role from the left, Modric is able to largely forget his defensive responsibilities and instead focus on wandering into those pockets of space that he loves to find. He is much more of a threat when he can do this, and has certainly shown his best Spurs form when doing so. The prospect of Modric tucking in whilst Bale overlaps is mouth-watering.

If it means that Luka is in his wide left role, I’d even rather see Jake Livermore get his first start, but hopefully Huddlestone and/or Jenas will be fit enough to partner Palacios. However, with Palacios still walking the suspension tightrope, I do have a bad feeling that Redknapp will start with Huddlestone and Modric in the centre.

It looks as though it’s a straight choice between Kranjcar and Bentley for the right-midfield role, as Lennon’s not quite ready. Both have good and bad elements to their game, but I feel that Bentley gives us better natural width, so he would be my pick.

With Defoe back after injury, and Crouch having scored in his last two appearances, I’d fully expect them to start up front together. Pavlyuchenko’s display at Sunderland was pretty appalling, with his first touch consistently letting him down; I do wonder whether he offers enough in general play. That said, he is clearly a natural goalscorer – you can’t have too many of those, and he has 8 goals in 9 appearances, which is impressive form.

Pavlyuchenko and Defoe are very similar players, so I think Redknapp will go with one or the other. Gudjohnsen could be useful from the bench, but I wouldn’t start him.

I’m hoping that we are able to select the following, which is arguably one player (Lennon) off being our best side:

I will be watching from block 140 tomorrow – COME ON YOU SPURS! 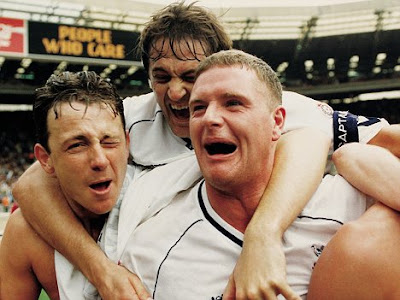