England have a very tough task ahead of them this afternoon, with Germany (6th in the FIFA rankings) to get past if they want to make it to the quarter finals. How do we beat the Germans? “Score more goals than them” is the obvious answer, and I’d like to think that today is the day that Rooney and/or Lampard will find some kind of form and answer their critics, but it might not be that simple. The key to the game in my opinion lies in England’s defensive midfield.

Werder Bremen’s Mesut Özil has undoubtedly been the star of the show for Germany so far, playing a vital role in both of their wins. He plays as the Trequartista in a 4-2-3-1 (the formation that I would love to see England adopt), and has so far been effective in two out of three games – the Serbia game being a bit different, as he was forced to play as a striker after Klose’s sending off.

Both Ghana and Australia made the mistake of pressing the deep-lying midfield players (Schweinsteiger and Khedira), leaving Özil plenty of room to operate, and were made to pay. According to optajean, in the Australia game, “Mezut Ozil attempted (21) and completed (15) the most passes in the Australian half.” He was outstanding, and Germany scored four.

Note his average position against Australia (he’s number 8), just off the striker (Klose, 11) and pulling to the right slightly. 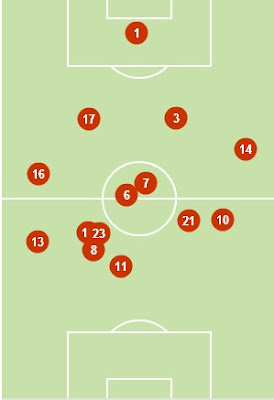 Australia played with Valeri and Grella in defensive midfield, with Culina just ahead of them. Presumably they were worried about being overrun by the Germans in the middle of the pitch but seemed to become so obsessed with stopping Shweinsteiger from dictating play, that they often left Özil totally unattended.

Ghana too made the mistake of affording him far too much time and space too, with Annan and Boateng both frequently pressing the ball, and it eventually came back to bite them when Özil unleashed this unstoppable strike. Just look at how little pressure on the ball there was: England are unchanged for this game and, therefore, Gareth Barry has an enormous game ahead of him. He does like to sit and hold, but more than ever his positional awareness will be tested. This is an area where I feel he can still improve as a player (and one reason why I’d personally rather see Carrick in the side). However, as I mentioned, Özil also tends to drift to Germany’s right, and Barry should be comfortable following him there, having often played on the left in the past.

There will be a defensive responsibility for Cole and Gerrard too, two players who prefer to get forward. I have been very impressed by Cole’s all-round game over the past year, and he’s probably been our best player in the World Cup so far, but this is by far his biggest test.

Also worth mentioning that Bastian Schweinsteiger being fit to play is a blow, as he is another key player for the Germans. I would expect Rooney to drop deep to make up the numbers in midfield, and hopefully stop him from getting on the ball.

Stop these two, and we will be in with a great chance. Come on England!