A tight game at White Hart Lane, where Everton, lacking the attacking threat of both Fellaini and Arteta, nullified Spurs’ attacking options well. Heitinga was deployed in a virtual man-to-man marking role on van der Vaart, Seamus Coleman doubled-up well on Gareth Bale, and Leighton Baines handled Lennon exceptionally (see the below Chalkboard to see how often he got in behind him). It was left to Luka Modric to be the creative spark for Spurs, and he nearly came up with a goal, drawing a good save from Howard, and skidding one shot just wide in the second half. The chance of the match fell to Peter Crouch – a header 6 yards out on the stroke of half-time was planted straight into Tim Howard’s grateful hands. 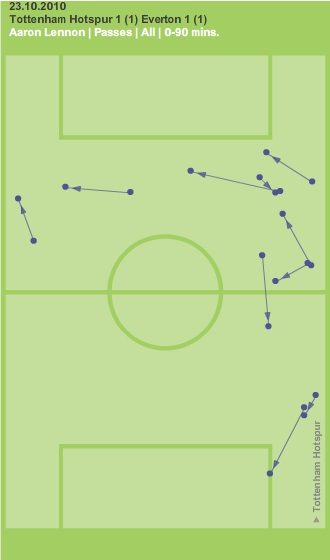 Question marks have been raised about whether Everton’s free-kick should have been awarded, but I’m not sure that the referee could have done anything else. 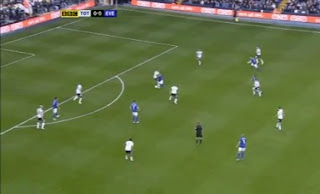 Firstly, worth noting the referee’s view, as Pienaar feeds the ball into Yakubu; it is partially obscured by Palacios’ position. However, he can’t help but failed to notice Kaboul charging in to try to win the ball – sometimes it’s better to stand off, especially in a situation like this where the doesn’t seem to be any immediate threat. 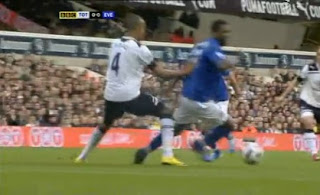 Yakubu clips the ball around the corner, and goes down on the turn as if he’s had his legs taken – he hasn’t. However, it’s clear to see that Kaboul does have both hands on him. Not enough to send Yakubu to the ground, but it’s clever forward play, and Kaboul was punished for a bit of naivety. 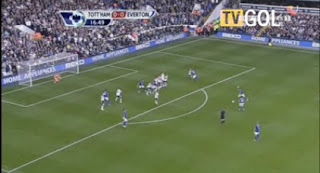 What a free-kick. You don’t see Gomes beaten from too many of these, but Baines really does get this spot on. Over the wall, and right into the corner. 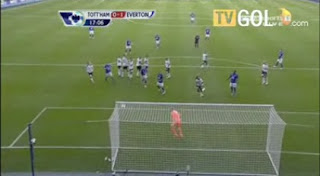 Gomes barely even moves – he is well beaten by a great strike.

Spurs did well to get back on level terms so quickly, and it was a shame that we couldn’t find a winner after an industrious second half performance – the result was probably a fair reflection though, and it is by no means a bad result, especially after a tough test in midweek.

One brief comment on the team selection – I was disappointed that Crouch started up front, and he did nothing to change that opinion, despite getting an assist. His finishing (the header and the two chances with his feet) show the sort of form he’s in – in my opinion this was the sort of game were Pavlyuchenko may have been a better option. Whilst he offers less of a presence, his movement helps to create space for our other attacking players, and his goal record is far superior to Crouch’s. It will be interesting to see what line-up Redknapp opts for next week.