Analysis of the goal conceded against Inter

Not only a wonderful team performance, but a night of brilliant individual performances, with a number of our players putting in arguably their best ever showings in the lilywhite shirt –  Cudicini, Gallas, Kaboul, Assou-Ekotto, and of course, Bale.

The “Premier League” pace of our attacking approach play was too much for Inter Milan to cope with, and our intense pressing and deep defending against Eto’o largely restricted them to shots from distance, and the one goal that we did concede came from a situation where we backed off – albeit to one of the world’s best strikers.

A lot has been made in the press about Inter’s “weakened” team, but not so much has been mentioned of ours – this historic win came without first teamers Gomes, King, Dawson (or Woodgate), and Defoe, as well as last season’s regular right-back, Corluka.

A simply incredible achievement, and one for which Redknapp should take an enormous amount of credit for. Little is said of Harry’s tactical knowledge and achievements, but in using Jenas in van der Vaart’s role in the second half, he ensured that Modric operated in a pocket of space that he regularly found in the first, and also utilised Jenas’ tremendous energy levels, as he was able to get forward when necessary, but also drop back in as we defended.

I don’t want to linger on negatives, so I’ll keep this analysis brief – I was tempted not to do it at all, but my OCD got the better of me. 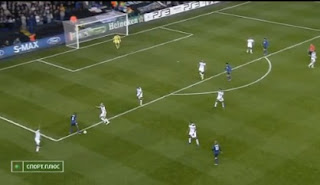 Sneijder finds Eto’o, who has got himself into a position on Hutton’s shoulder. Hutton isn’t tight enough, but should be trying to show Eto’o on to his weaker left foot. 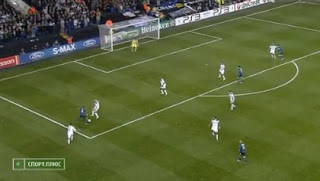 Because Hutton initially wasn’t tight enough, he tries to make up for it – unfortunately all he does his commit himself, and allows Eto’o to nimbly take a touch to get the ball on to his right. One more touch, and Eto’o has room. 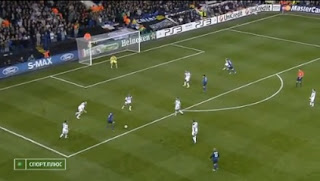 Sky’s Andy Gray frequently mentions strikers using the positioning of centre backs to curl a shot into the far corner, and this is a good example. Eto’o uses Gallas’ position to his advantage, and looks to angle his shot around him. Gallas arguably doesn’t come out to him quickly enough, but Eto’o moves (and thinks) so quickly. 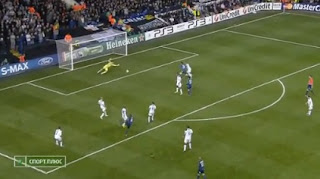 Cudicini has no chance – it’s beautifully struck, and into the corner, low and hard.

Just to finish, I have a couple of offers to bring you – firstly, the kind people at Early Bath are offering Spurs fans discount on their football related gifts until Christmas – if you enter the code ‘COYS’ you’ll get 10% off. While you’re there, take a look at their blog – it’s a good read, and recently featured an interesting article on Nani’s goal.

In addition, I have teamed up with Picklive, who you may have heard about on The Football Ramble podcast. They offer a sort of live “Fantasy Football” – it’s £1 entry, and the top three players share the pot. However, every Windy’s Blog reader can get a Picklive trial – 3 games free.