We truly are the comeback kings this season! In a rather bizarre match, in which neither team seemed to play to their true capabilities; in many ways it became a game of “who could make the least mistakes”. We got our first win away at a “big 4 club” (*spits*) in three thousand and forty five attempts. A wonderful result, and one which will hopefully be a load off the mind for players and fans alike.

I am incredibly jealous of all who were there, but must compliment you all on the wonderfully vocal support. Our away fans are second to none. 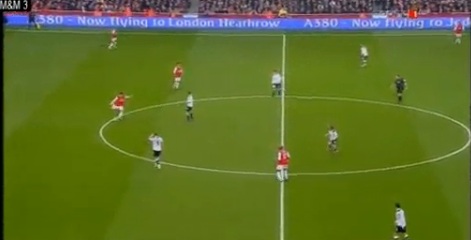 Fabregas has the ball in the centre circle – he decides to go uncharacteristically direct, seeing Nasri on Assou-Ekotto’s shoulder. 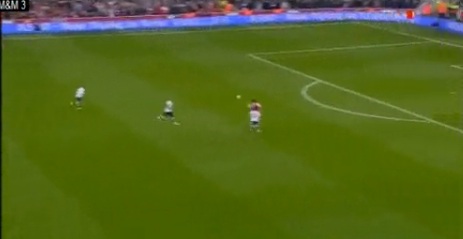 The run is what makes this goal – you can’t see it in this image, but he angles it superbly, and Assou-Ekotto has a tricky decision to make – step up and play offside, or drop off. He gets caught in two minds, and so when the ball does bounce, he’s not close enough to compete. 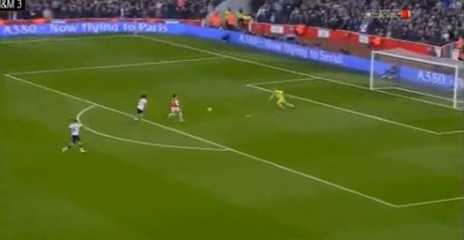 Nasri’s first touch is heavy, and Gomes should be coming out and taking this. He hesitates, and when he finally does decide to come, he’s not quite brave enough. 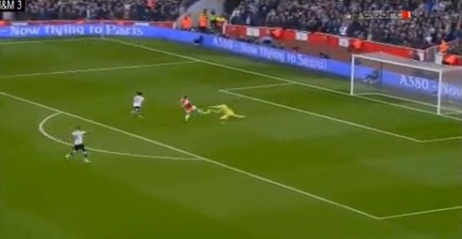 Nasri manages to touch it round him – Gomes seems to get something on the ball, but really needs to be taking the lot here – ball and man. It’s his hesitation that has cost him, and that is probably caused by a few shaky moments this season, including his sending off at Inter. 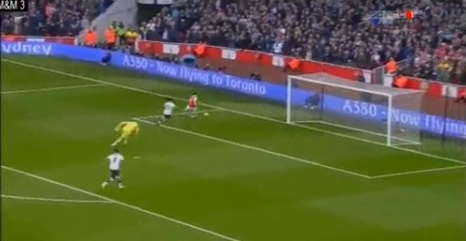 Nasri is left with an empty goal, but a difficult angle.

He stays composed and finishes it well.

Two things to mention in regard to the second goal. Firstly, Hutton is smashed in the ribs by Clichy just prior to this, and goes down. Spurs have possession, so the advantage is played. We throw bodies forward – Bale, Pavlyuchenko, van der Vaart, but also Jenas, who ends up on the goal line as Lennon over hits his cross. Pavlyuchenko does well to keep it in, but it falls nicely for Nasri who has the opportunity to counter. Modric should have seen Jenas bombing on, and just held his ground. Instead, he decides to go after the ball. 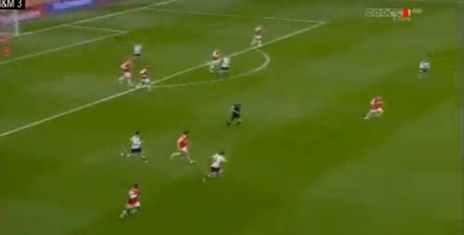 When Arsenal win the ball back, Modric is now in no-man’s land (centre of image), and we have a gaping hole in the middle of our midfield. 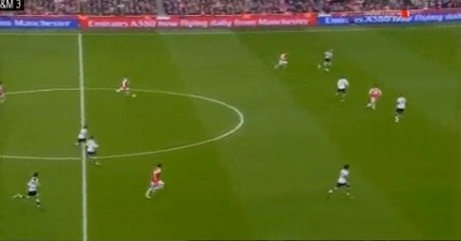 Between Nasri and Denilson, they work it quite nicely to Fabrgas, and he’s now running unchallenged at our back four. Hutton is back up on his feet, but running gingerly. 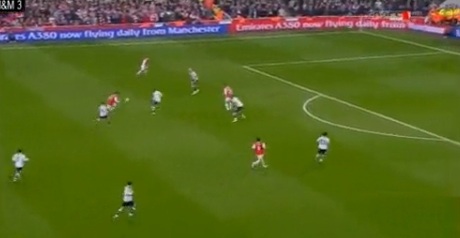 Perhaps Hutton still has the whack he has just taken in the back of his mind, as he simply doesn’t mark Arshavin. Instead, he leaves enough room for Fabregas to easily find him… 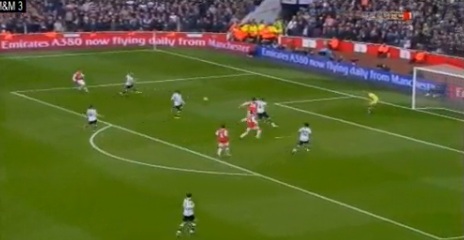 …and then stands off and lets him put a cross in. 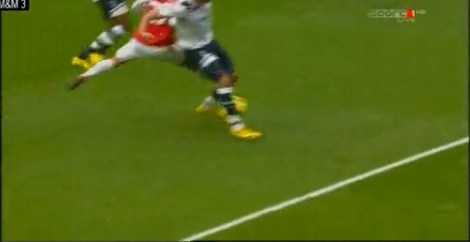 Chamakh has a lot to do – he has to get ahead of Kaboul, and steer the ball goalwards. He makes it look easy – a nice subtle finish, but could Kaboul have done better? Always tricky when you’re facing your own goal.

Full credit to our players for not giving up and, when you have top quality players in your side (as we do nowadays), you always have a chance to get a goal. When the chances came, we took them wonderfully – from Bale’s exquisite touch and finish, to van der Vaart’s clinical penalty, to Kaboul’s intelligent back header – great finishing.

But please, Spurs – stop giving us fans heart attacks, and start defending like we know you can!