Analysis of the goal conceded against Birmingham (plus Chalkboards)

Firstly, 1-1 was a reasonable result without King, Dawson, Kaboul, Huddlestone, Jenas, and van der Vaart. Birmingham have lost once at home in the league since September 09, which is a remarkable achievement, and testament to Alex McLeish’s ability to set up a team not to lose (that is genuinely not meant to be patronising).

However, it’s very disappointing to be ahead for so long, only to be pegged back by a relatively soft goal, and during the game I felt that Redknapp could have reacted more quickly. I personally wouldn’t have selected Defoe as I thought that he looked incredibly rusty against both Arsenal and Liverpool, and yesterday he again showed a lack of sharpness. For me, he should have come off between 55-60 minutes, when he was clearly flagging. His touch was poor, and the ball often bounced off him, meaning that we were immediately on the back-foot again.

Another option would have been to bring on Sandro to shore up the midfield, and offer some protection at the edge of the box. Sandro for Lennon, Modric to a narrow wide right starting position – easy to say in hindsight, I guess. 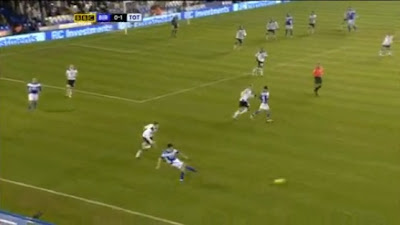 A throw on the Birmingham left is passed back and Spurs look to press out. 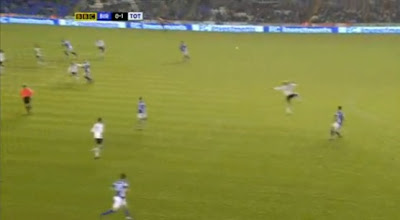 The ball is worked back out to Roger Johnson, who immediately looks for a long diagonal to Zigic – an obvious target. Zigic has pulled wide, and Assou-Ekotto is nowhere near close enough to him. 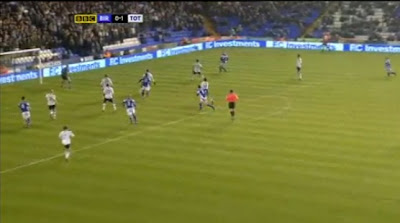 As a result, Zigic is able to head the ball into the danger area totally unchallenged. Gardner is on the edge of the box, and has anticipated Zigic’s header. 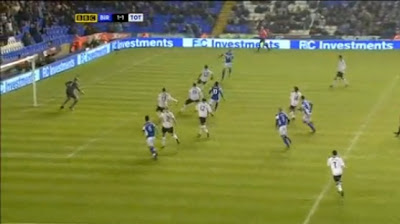 This picture shows Gardner’s run up quite nicely – however, we should have plenty of players in positions to be able to deal with the danger – Gallas and Palacios in particular. 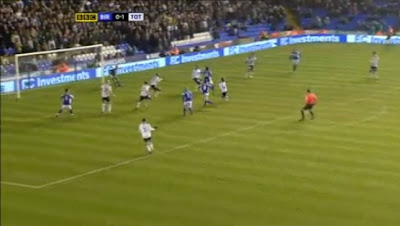 Gardner easily gets ahead of Modric, who has nodded off, and it is now a straight battle between Gallas and Gardner. 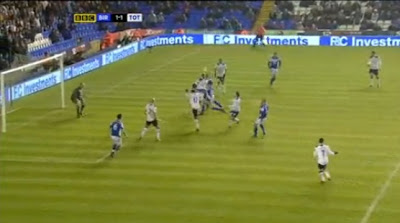 Gardner has the momentum from the run, but Gallas is not brave enough. In my opinion Gardner simply wants to win this challenge more and whilst he shows tremendous tenacity, Gallas should be getting his head on this.

A very soft goal to concede – you don’t want to see your main centre back losing out in this manner, but Assou-Ekotto leaving Zigic in so much space certainly didn’t help the situation. We actually lost a worrying number of aerial challenges in our own box – the red circles at the bottom of this Chalkboard are all aerial battles that we lost – the goal situation being the most central. Having Michael Dawson back will be a huge boost in this respect. 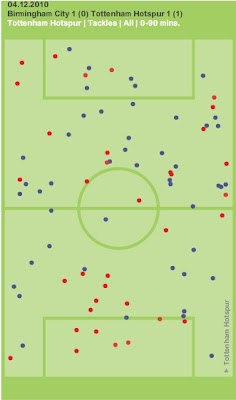 Birmingham deserved their goal – they had the momentum with them in the second half, whereas we were mainly restricted to occasional half-chances on the counter. But we simply should have killed them off sooner.

I tweeted in the first half that the game would have been over if we had a top-class striker – the sheer number of balls into the box from our wingers was impressive. Not all of great quality, but it’s worth a look at the Chalkboards for both Lennon and Bale’s passes: 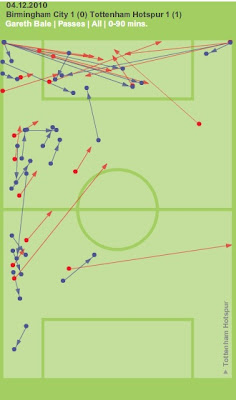 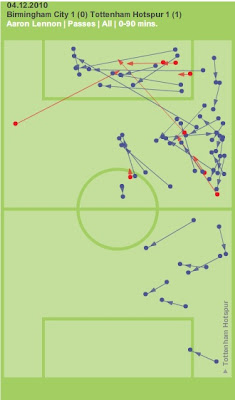 If only we had a Drogba, Torres or Rooney…