What a breathless game! Spurs conceded another sloppy goal inside the first five minutes to leave a real uphill struggle, but this time we immediately hit back. We then showed genuine spirit when coming back from 3-1, and could even have won it when, first, Modric could only side-foot straight at the goalkeeper, and then Crouch couldn’t direct his header downwards.

The first goal, in many ways, illustrated the key tactical discussions leading into the match. 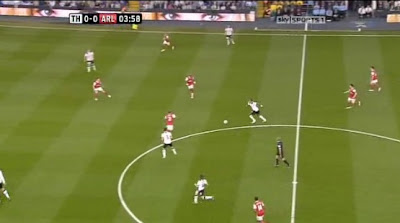 Huddlestone has possession in the middle of the pitch, but his touch is heavy, and the ball gets away from him. 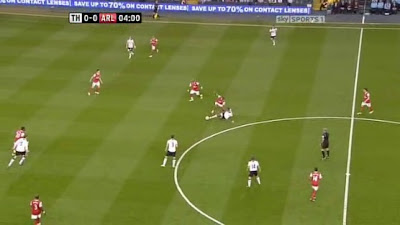 He lunges into a tackle, but Diaby is strong, and holds on to the ball. 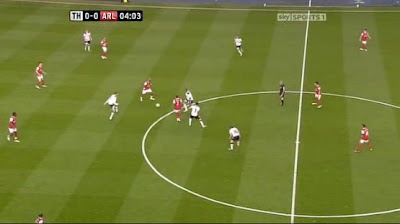 Able to shield it, Diaby plays to Song; he cleverly plays first time to Fabregas, who is stood beyond our entire midfield. 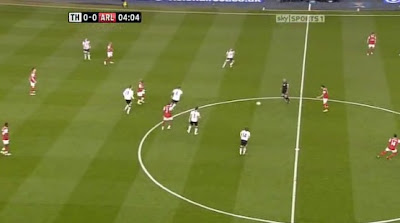 As the pass is made, Walcott is immediately aware of the advantage that Arsenal could develop. 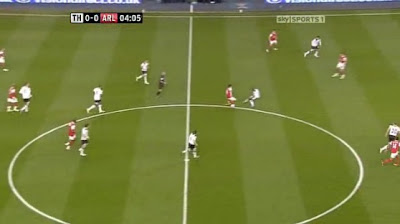 Gallas make a split-second decision, but it’s a poor one in my opinion. He rushes out from centre back, to close Fabregas. The only benefit of committing himself this high up the pitch is if he can get close enough to 1. make a tackle, or 2. stop Fabregas from making a pass. He doesn’t do either – Fabregas can still find either van Persie or Walcott. Dawson knows that he has a problem with Walcott, as he is clearly much slower. This all happens quickly (Arsenal are the masters of the quick counter), but Assou-Ekotto has not read the situation, and has not come round to cover. 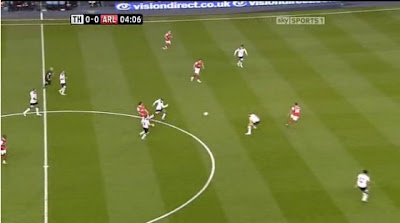 Fabregas weights the pass to Walcott perfectly. Gallas is out of the game, Assou-Ekotto is not close enough round on the cover, and Dawson, not backing himself in a race with Walcott, seems to have made a decision to attempt to play him offside (that, or he thinks he can intercept the pass). 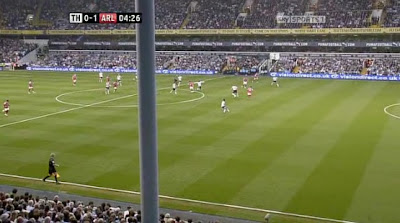 This image shows that Assou-Ekotto is clearly playing Walcott onside. 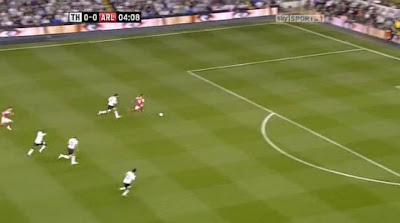 Walcott gets the ball out of his feet, and nobody is going to catch him. 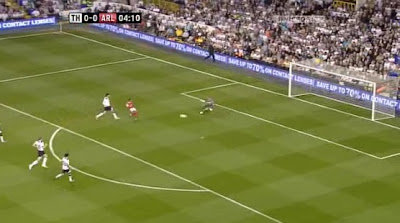 Gomes comes off his line to narrow the angle, but it’s an excellent finish into the corner.

As I say, the move unfolded quickly, but there are several things to note. Firstly, Fabregas is in “the hole” with no Spurs player close to him, and the Arsenal players know to get the ball to him as quickly as possible. This illustrates the flaw in not matching up to Arsenal (although we saw the benefits with two of our goals). After Gallas makes a reckless decision to close him down, we have little option but to play offside. Unfortunately, our remaining defenders were not on the same page. This either tells me that they have switched off, or have not been drilled enough.

It is worth noting, of course, that one of the big decisions of the game was the incorrect van Persie offside call – this was not the only example of a poor defensive line. 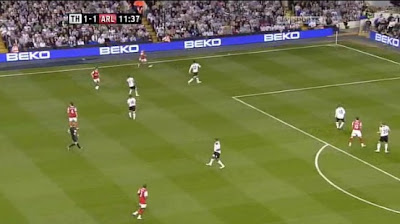 Arsenal have possession in a wide area, but van der Vaart takes up a decent defensive position, and we are well set-up to defend. Notice that Huddlestone has one eye on Diaby. 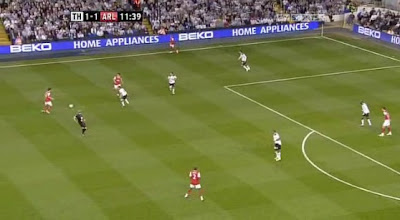 Nasri finds Fabregas and makes a run inside. Van der Vaart does the right thing and trots after him. 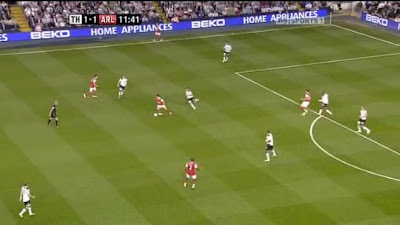 When Nasri receives the ball back, van der Vaart is quick to close him. 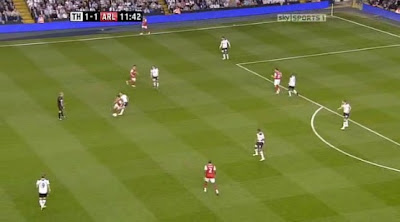 He puts a challenge in, and doesn’t quite get the ball… 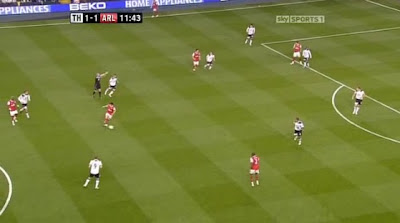 …but the referee indicates that he is playing the advantage. Nasri retains possession and looks to use Diaby in order to draw Huddlestone out of the centre. 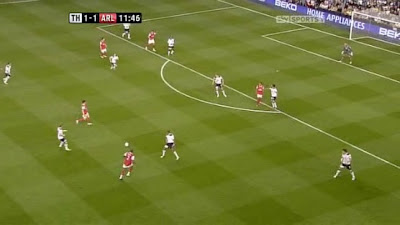 As Nasri comes further inside van der Vaart just totally stops tracking him and, with Huddlestone having moved towards Diaby, when Nasri gets the ball back, he has a free run at our back four. 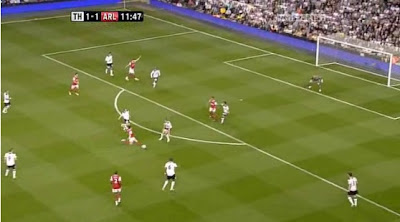 Dawson comes out quickly to close down, and Assou-Ekotto covers round. 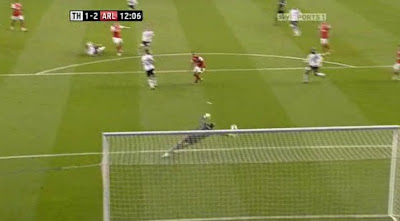 Nasri gets the shot away, and it takes a nick off Dawson as it goes through his legs. I personally still think that Gomes should be saving this. It’s not far from the middle of the goal, and it is his positioning that is wrong – he has moved too far over to cover the near post, leaving himself short.

A frustrating goal, as van der Vaart really should have tracked his man all the way inside. 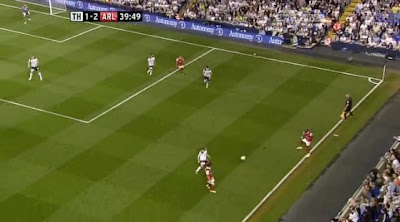 Sagna takes a throw-in and gets the ball back from Fabregas. 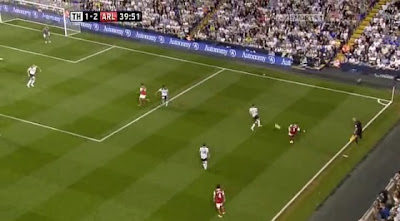 Bale comes across to Sagna but doesn’t stop the ball coming in. Notice Assou-Ekotto with Walcott at this point. 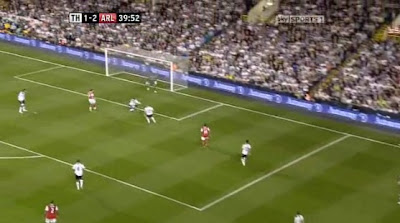 Gallas should be hooking this ball into the stands – a corner, a throw-in, it doesn’t matter. Walcott has now got in ahead of Assou-Ekotto. 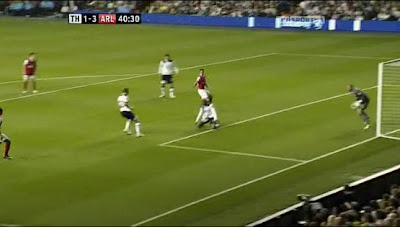 Gallas tries to chest the ball down, presumably so that he can clear the ball straight up field. 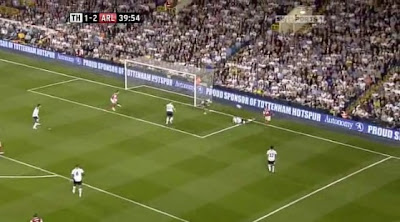 The chest trap bounces nicely for Walcott, now well ahead of Assou-Ekotto and, under pressure from Gallas, he lifts an excellent cross for over Gomes for van Persie. 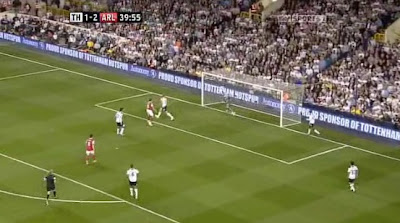 Gomes makes a wonderful save from the initial header. 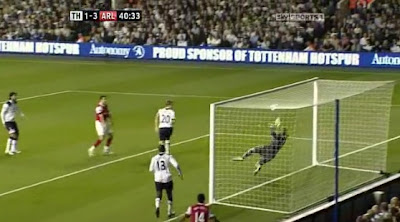 You have to feel for Gomes here – he could not do much more, as he stretches to claw the ball out. 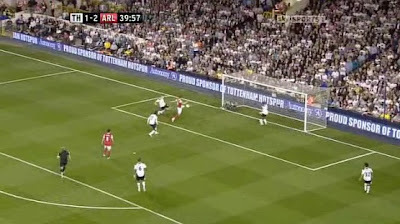 Unfortunately the ball lands nicely for van Persie, who smashes the ball into the top of the net.

Gallas did well in the second half and was clearly suffering from some sort of strain or pull, but his decision-making for two of the three goals was not what it should be.

Interestingly, it looks from the Chalkboards for tackles (below) like we chose to defend much deeper in the second half (perhaps we finally learnt a lesson) and this could explain why we did not concede more goals after the break. 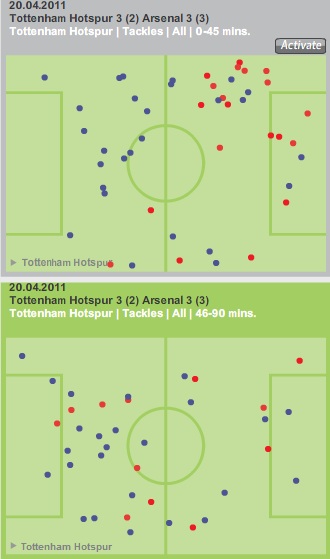 Our team did really well to come back from two goals down, and Redknapp’s use of substitutes was generally good. Although Corluka had an excellent first half (including an exquisite pass for van der Vaart’s first goal), Kaboul added extra attacking thrust in the second half.

A note on our strikers to end

Whilst we found Crouch with some decent diagonals, we did not get close players close enough to him to profit. This, along with his poorly directed headers, meant that he ended up making only one successful pass in and around the box. 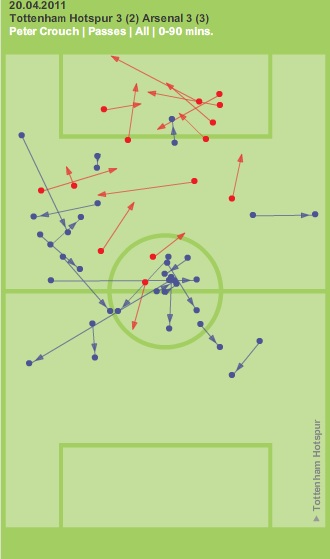 On the other hand, Pavlyuchenko ended the game with an 86% pass completion. He played the link role well in the first half but, when we started to go more direct in the second, he saw much less of the ball and made just 6 of his 22 passes during the second half (he was substituted on 78 minutes). 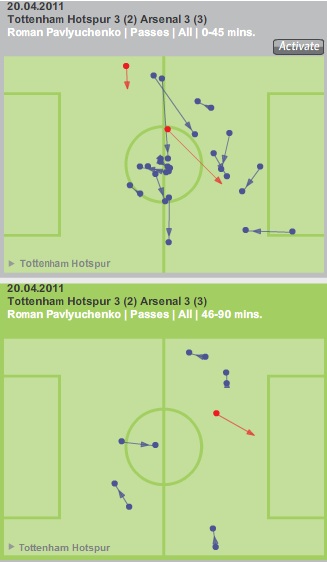