Analysis of the goals conceded against Manchester United (22/8)

Welbeck’s goal – fantastic delivery from Tom Cleverley, and Danny Welbeck guides the header into the corner. 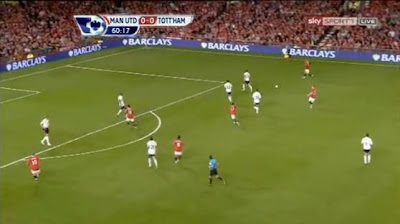 With Assou-Ekotto having failed to get any distance on a clearance from an attempted cross-field pass from Rooney, United build down the right again. Cleverley feeds Smalling, who was often very advanced in the second half. 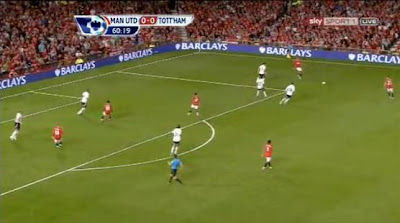 Smalling lays the ball back to Cleverley, and we have three players who aren’t really preventing anything from happening – at least one should be closer to Cleverley. Note Kaboul’s position – he is marking Welbeck but has one eye on Nani, who has drifted into a good area untracked. 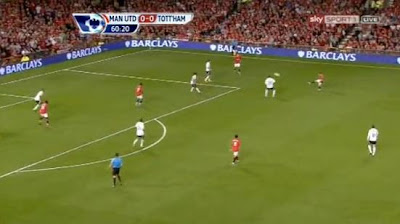 Kaboul is caught in two minds – he is unsure whether Cleverley is going to feint to cross and play it into Nani, and so is caught flat-footed. 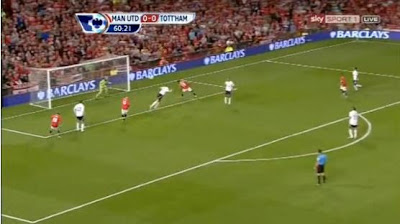 As a result, Welbeck – who has only one thought in his mind – steals a march on him and, such is the quality of the cross, is able to guide the header into the far corner.

Anderson’s goal – a wonderful United move ends with Welbeck finding Anderson with a cheeky back hell, and the Brazilian side-foots home. 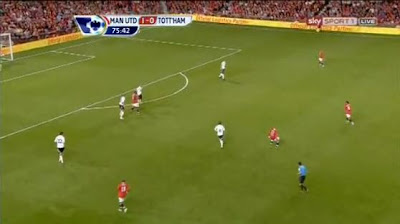 At this point Spurs have made two changes in midfield, and are getting a little bit desperate, throwing bodies forward – it is 5 against 5 in this picture. Rooney lays off to Anderson, who has surged forward. 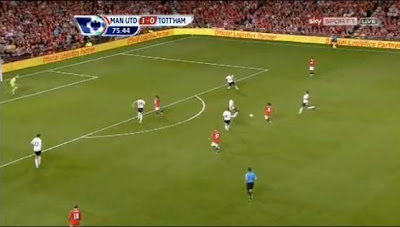 Kaboul comes out to press the ball, but is not helped by any of his team mates (notably van der Vaart), who fail to follow Anderson’s run. 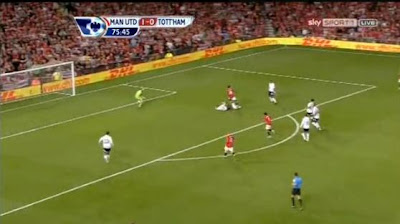 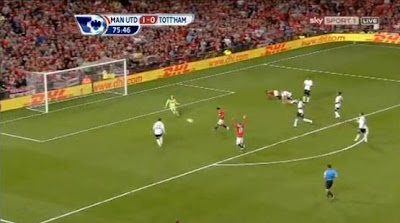 …and leaving Anderson with a simple finish beyond the helpless Friedel.

Rooney’s goal – similar to the first goal, Rooney finds the corner with a header from an excellent Giggs cross 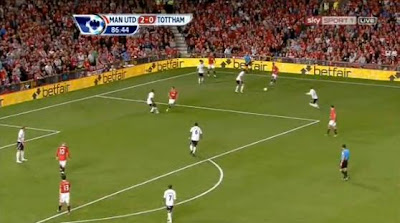 United have a period of possession from a throw-in. Giggs makes a move off van der Vaart’s shoulder, and Nani looks to find him. 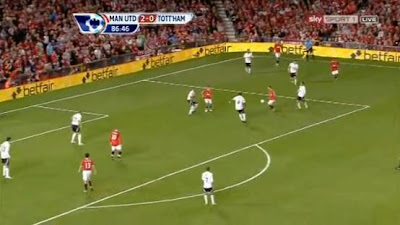 Van der Vaart suddenly realises that he has let Giggs go, but too late to have an impact. Kaboul attempts to come out to put some pressure on the ball, but Giggs’ close control is excellent in a relatively tight area. 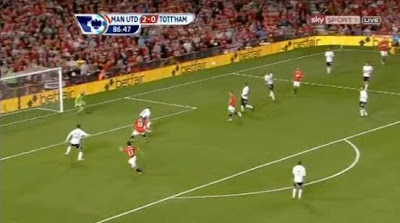 Another top class cross from United, who put a number of excellent deliveries into the box throughout the 90 minutes. 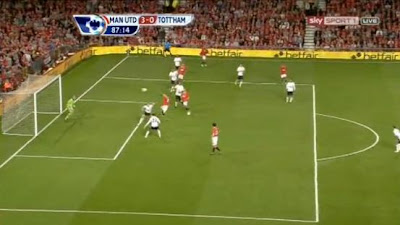 Dawson is caught on his heels, and Rooney easily gets up above him to send his header into the far corner.

Spurs matched United for 60 minutes, and had a few chances of their own, including a reasonable shout for a penalty after a foul by Jones on Bale right on the edge of the box (which the referee failed to spot). When Kranjcar started to tire, Redknapp took him off but rather stragely took Livermore off at the same time, bringing on Huddlestone and Pavlyuchenko, and dropping van der Vaart into central midfield. Two of the subsequent goals then came about by poor positioning and tracking in our deep midfield area where van der Vaart did not cope well.

I have never been a great fan of Redknapp’s use of substitutions, but yesterday’s were more mystifying than usual. Still, credit must go to Redknapp for his selection of Friedel, who had a fantastic debut, and looked very agile for a 40-year old.