Oh so close! Leicester are a good side at this level – they consistently produce good teams that finish well in the FAPL (they’re currently a point above us), although last year we beat them in the home match, with Bostock scoring. Today we started with a very young defence (presumably saving the likes of Jack Barthram, Daniel Day and James Yeboah saved for the NextGen Series), although had some experience in “overage” goalkeeper, Jonathan Miles. Leicester, on the other hand, fielded the maximum of three overage players including the giant centre half, George Taft.

Spurs set up in a sort of 4-3-3, with both wide men very advanced, tight to the full-backs, and Munns just ahead of Hawkins and Dombaxe, who both sat deep. The away side played a definite 4-2-3-1, so the formations were pretty much matched up.

The match took some time to settle, but the first chance fell to the away side – Miles’ slip nearly proving costly, but the forward only able to prod the ball wide having got in.

Laste Dombaxe threaded Ken McEvoy through with an excellent pass – McEvoy showed good close control, but was only able to win a throw. Shortly after, McEvoy made strides again, and got a couple of crosses in in quick succession.

It was 0-1 on 13 minutes, when a long ball over the top caught our two centre backs out – the forward, Hopper, headed the ball into his own path, and finished well. Miles barely moved off his line, which led to a few of his team-mates questioning why he didn’t come out as soon as the ball was played over the top.

Three minutes later Spurs got level; as Coulthirst tried to make a yard of space in the box, the ball popped up and was handled on the edge by a Leicester defender (although it was from very close range), and the referee was quick to make a decision. Dombaxe calmly sent the goalkeeper the wrong way, as he put it low into the bottom corner.

Alex McQueen picked up a booking for a challenge on 20 minutes which meant that he was walking a tightrope for the rest of the game. The resultant free kick was crossed, and Miles palmed it up into space, where he collected at the second attempt.

McQueen stepped out of defence calmly and found McEvoy with a clever pass inside the full back. McEvoy used his pace well to work a cross and Jack Munns, a late runner into the box, narrowly missed the ball.

At the other end, Sheriff conceded a free kick – the dangerous Jack Warburton, stood in a central area unmarked – his manager shouted “you can receive it there and shoot”. The free kick was duly played to him, he took a touch and his effort towards the corner was well saved by Miles, springing to his right.

Dombaxe gave the ball away n a dangerous area, and Hopper charged through only to put the chance wide. Again play changed to the other end and Coulthirst delivered a superb ball across the face with the outside of his right foot, but nobody was there to meet it. Connor Ogilvie then won a corner on the half hour mark when he made a strong run down the left, but it came to nothing.

Coulthirst had an excellent effort shortly afterwards from the edge of the box, before Munns had a tidy run before his shot was blocked and out for a corner. From the corner, the ball was played back out to Munns. His cute cross was controlled neatly by Coulthirst, who turned quickly and beat the goalkeeper low to his left. 2-1!

Ogilvie won a corner with another strong run from full back, and the second ball in was glanced on by Coulthirst, with the keeper making a good save.

On the stroke of half-time there was some controversy. A clear foul in the middle of midfield (possibly on Hawkins) was not given, and as the ball was played forward, there was a tangle between Alex McQueen and a Leicester forward on the edge of the box. The referee gave nothing, but the linesman continued to flag. The referee elected to go with his assistant (who seemed to be implying that McQueen had swung an elbow – I certainly didn’t see an elbow), despite having been quite close to the scene. He had a long talk with McQueen, who had been booked earlier. The resultant free kick was lifted over the wall by Steve Smith and nestled in the corner to Miles’ right – 2-2.

As the players walked off, Alex Inglethorpe had strong words with the referee, presumably questioning why he would let his assistant make the decision from a lot further away.

At half-time Inglethorpe made a change, with Dominic Ball coming on to replace Alex McQueen, who had been booked and was on a last warning following the incident in first half injury time. Ball is primarily a midfield player, but slotted into the centre back position. Spurs were straight on the front foot, with McEvoy flashing a cross/shot just wide, with a few players caught on their heels.

McEvoy had our next chance – played in with a diagonal ball he had the pace to beat the full back; as as he came inside to shoot, the keeper rushed out and he needed to lift the ball over him from close range. Unfortunately he didn’t get enough height on his effort on the stretch, and the keeper smothered it.

Leicester City took the lead on 56 minutes when Spurs again lost the ball in a dangerous area, and Jack Warburton scored from an accurate cross. 2-3.

Spurs were struggling to create anything clear cut – McEvoy had a good run down the line, but ran out of space, before a low Coulthirst cross was hacked clear on the line by a Leicester defender. Hawkins won a free kick with some neat footwork, although it came to nothing, before Coulthirst had a reasonable shout for a penalty – knocking the ball beyond the full back on the right flank, before being taken down – the referee told him it was “a coming together, nothing more”.

Spurs had a good spell of pressure, but were unable to find the elusive equaliser. At the other end, Leicester’s left back Jamie Anton, who had a good game, curled a lovely effort just over the angle of post and bar, before Spurs brought on Ruben Lameiras for Lee Angol and then Roman Michel-Percil for Ronnie Hawkins. McEvoy had another cross right across the face, before Spurs piled on the pressure again. First Connor Ogilvie won yet another corner through chasing a lost cause, before Lameiras found an equaliser – his shot deflected into the bottom right corner after some very neat interplay between Munns and McEvoy. 3-3.

Leiceste’s Joe Dodoo dragged a shot wide, before a superb piece of link-up play between Lameiras and Michel-Percil led to Coulthirst turning quickly on the edge of the box before being fouled for another penalty. With a minute to go, Laste Dombaxe stepped up for a second time, but this time the keeper guessed right – unfortunately it was placed at a nice height for the goalkeeper, and he parried it away.

Spurs still pushed for a winner, and Coulthirst got through, only for his clipped shot to smash the keeper in the face and bounce to safety – in fairness, a brave save from the goalkeeper, who spread himself well.

In the final seconds, the visitors won a corner and it was met by a Leicester City head – luckily for us the player was stretching, and it went harmlessly wide.

Jonathan Miles 6 – made a couple of decent saves, but questionable for both the opener (when he could have read the game and come off his line), and the free-kick (which was into his near post).
Ramil Sheriff 6 – a centre back playing at full-back, and he did a good job, often covering well. A little limited going forward, but he tried to provide an outlet.
Alex McQueen 6 – excellent on the ball, and consistently stepped out to start play. Had a bit of an issue once he’d received a yellow card, and was rightly taken off to ensure that he wasn’t sent off for a mistimed tackle.
Oliver Modeste 5- I gather that he’s primarily a full-back and, bearing that in mind, he did a reasonable job. He was caught out a couple of times against Warburton and Hopper, both considerably bigger than him.
Connor Ogilvie 7 – did exceptionally well at left-back for a player that I understand is normally a centre back. Made three or four solo raids down the left, winning corners or getting us into good positions each time. An imposing figure and, at just 15, he is one to keep an eye on.
Laste Dombaxe 8 – calm, strong, clever – an excellent performance from him. Always on hand to receive the ball when his team-mates were in trouble, and normally used it well. A few slack passes, but with the number of bodies and pressure in midfield, that was understandable. He took his first penalty well, and it was just a shame that he couldn’t get the winner that his performance deserved.
Jack Munns 7 – industrious as ever, and his short, quick passing helps the team get forward quickly.
Ronnie Hawkins 7 – uses the ball very well with his left foot, always looking to spread play and bring others into the game. If he could work on his right-foot passing, he could become Carrick-esque.
Kenneth McEvoy 7 – quick, lively, with excellent close control and a good awareness of others. It didn’t always come off for him, but that was more down to Jamie Anton sticking to his task well.
Lee Angol 5 – a little disappointing that he didn’t get on the end of one or two of the dangerous crosses we had, but his constant pressing and harrying was very useful and often forced Leicester to play the ball forward early from the back, surrendering possession.
Shaq Coulthirst 8 – looked really lively on the left – strong enough to hold the ball up successfully before producing either a shot or a cross. Also very good at playing on the last man and springing a counter. The best performance I’ve seen from him.

Dominic Ball 7 – played at centre back despite being a midfield player, and his ball-playing ability was very useful in the second half. Caught up-field a couple of times, but that was understandable.
Rueben Lameiras – his one and two touch passing game came at a perfect time, and he drew us level with a deflected effort from distance. Initially came on to play from the left, but replaced Hawkins in a central area when we made the third substitution.
Roman Michael-Percil – a very useful impact player to have on the bench – he has great acceleration and a low centre of gravity, and he got into some very useful positions down the left, cutting in and using his right foot.

The FA Premier Academy League table is now as follows: 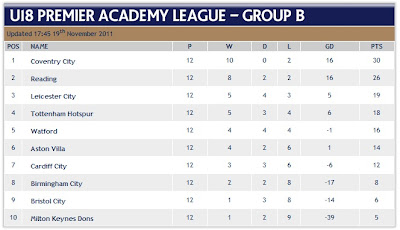