Out foxed by Allegri or just unlucky?

Having completed so much of the hard work on Wednesday night, Spurs were sadly unable to see out a tie which we largely dominated across two legs. Ultimately we had 23 minutes to see out, but our wily opponents out foxed us and did enough to scrape through – which you could say is somewhat typical of them.

Juventus’ tactical switch on 60 minutes arguably made all the difference. Kwadwo Asamoah came on for Blaise Matuidi, with Juventus switching to a back four and Alex Sandro suddenly having greater support on the left. Max Allegri perhaps got slightly fortuitous with the next change moments later – his hand was somewhat forced with Medhi Benatia’s injury, but rather than bringing on Daniele Rugani to replace him like-for-like as a centre-back, he brought on veteran Stephan Lichtsteiner to play as an attacking right-back, shifting 36-year old Andrea Barzagli inside. The shape change created their first goal — and arguably their second. 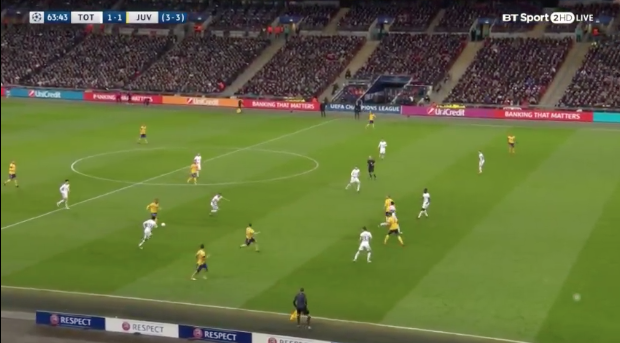 Lichtsteiner had been on the pitch a matter of moments when he burst forward to support a Juve attack, immediately giving Ben Davies a problem with an overload on our left. 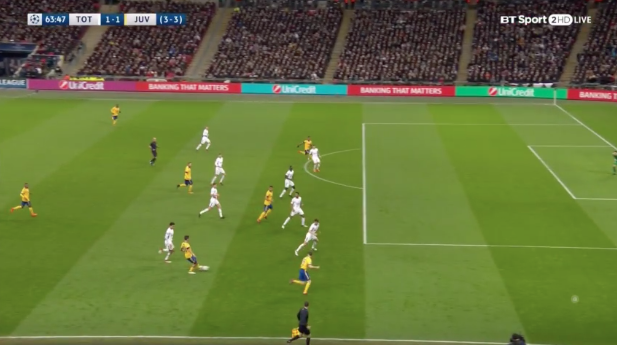 Davies did not have any real support and Lichtsteiner was easily able to get down the line and put a cross in. 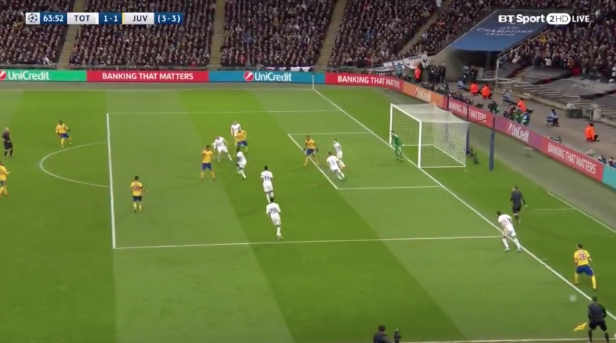 The cross came in, Davinson Sanchez spotted Sami Khedira but couldn’t challenge him in time, and he flicked the ball on intelligently. 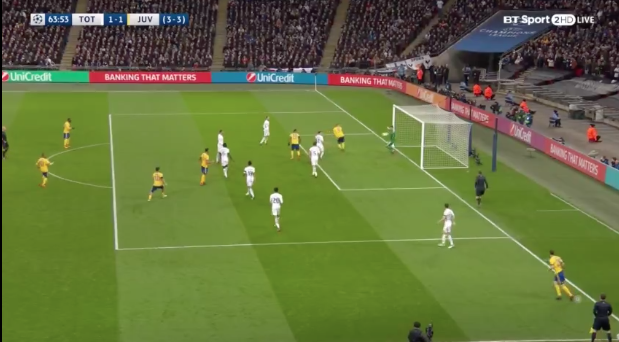 Neither Kieran Trippier nor Christian Eriksen followed Gonzalo Higuaín and he was left with a tap-in at the back post.

Spurs had seven defenders against four attackers in the box, and so to concede in this manner was disappointing – we can be vulnerable from crosses due to similar disorganisation, and it is one area where we could tighten up. When you play with attacking full-backs, covering at the back post is not easy, but this goal was very preventable.

Pochettino didn’t react to the tactical/personnel changes when they happened, but nor did he/we sort ourselves out from the restart. With Spurs’ back four suddenly having to be very wary of Juventus’ increased wide threat and, therefore, spread across the pitch and vulnerable, Juventus mounted their next attack through the middle. 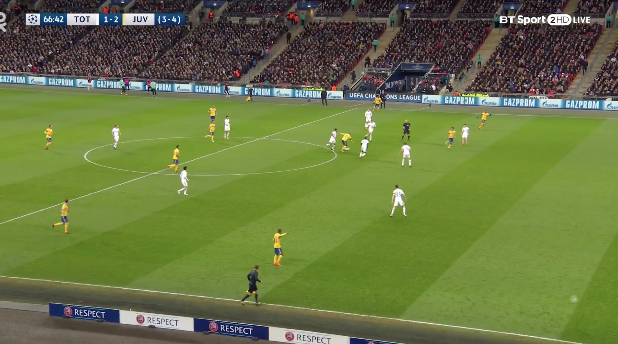 Ben Davies had dropped deeper due to the threat of the pace of Douglas Costa and added support from Lichtsteiner. The back line was suddenly not playing ‘as one’. Despite that, when Davinson Sanchez moved forward to press the ball, Trippier needed to cover round, tuck in, and stay with the forward. 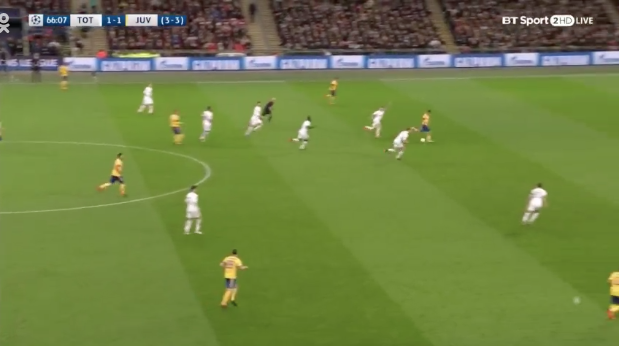 With Trippier caught in two minds he failed to track Paulo Dybala. Instead, he tried to play offside, allowing Dybala to run through unchallenged: he finished the move beautifully.

On the night, Allegri outdid Pochettino in these few key moments. He largely kept things tight (though Harry Kane did make a mug of Giorgio Chiellini for his big chance, and it could have been so different had that landed the other side of the post), restricting Mousa Dembélé with the extra body in midfield, and was able to turn the screw when it mattered, switching shape and adding additional support in wide areas through Asamoah and Lichtsteiner.

Hindsight is a wonderful thing, but Pochettino used to use Harry Winks as a player to come on and close out matches. Even without Winks on the bench, could we have brought Wanyama on when that first goal went in to steady the ship and try to try to keep the ball for a few minutes? A midfield three might well have been able to prevent that second goal.

There is nobody in world football that I would want more than Pochettino as our manager right now, and this criticism is not meant as a definitive statement of Pochettino’s failure. In fact, this Champions League campaign can absolutely be seen as a great success, as we have punched above our weight throughout. Our approach across these two games was highly impressive, and this was never an easy tie. We were playing against some elite players with decades of experience and honours to go with it, and yet we played with energy, fluidity and were easy on the eye.

Ultimately what was lacking was a bit of nous at key moments to reorganise, adjust, and to hunker down when needed. Pochettino will have learnt bundles from this match, as will our players, and hopefully it will stand us in good stead should we qualify for the Champions League again next year.

Me at 19:45 yesterday: it's a free hit, zero expectations, Juve are an incredible team & we have no right to beat them, whatever happens happens, the players have done us proud regardless, it'd be nice to go through but it's not the end of the world if we don't.
Me this morning: pic.twitter.com/rrwNbdyBtT