Two matches of the 2018/19, two new shapes for Mauricio Pochettino.

Pochettino was initially wedded to his 4-2-3-1 as Spurs manager, briefly becoming a 3-4-3 convert before going back to his previous shape once Toby Alderweireld’s transfer ambitions became clear. He has dabbled with a three-man midfield in both a 3-5-2 and 4-3-3, but has never stuck with either for any length of time and it seems to have largely been due to circumstance.

That circumstance has partly been a lack of available central midfielders, and that has been the case this season so far.

Thanks to WhoScored.com we can neatly see the average position of Spurs’ players in both matches. 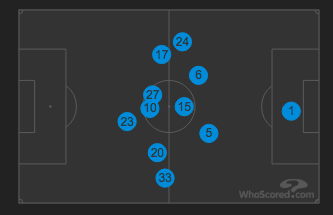 Against Newcastle, Dele played nominally on the left of the midfield three, with Moussa Sissoko on the right and Eric Dier as the pivot. But Dele was given the job of ghosting forward and interchanging with the unusually-advanced Christian Eriksen, whilst Sissoko was responsible more for protecting Serge Aurier on the right. 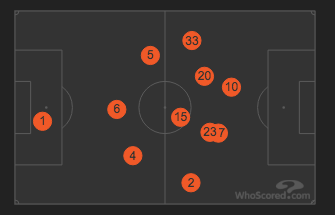 Against Fulham, Pochettino ‘rotated’, as he hinted he might. He took out Aurier and Sissoko – Spurs’ least effective players against Newcastle – and brought in Toby Alderweireld and Kieran Trippier.

Notably, the tactics changed wildly with the change in personnel. Suddenly we had a player at the back with a terrific range of passing, and a wing-back known for his crossing ability. Spurs often used Alderweireld’s passing to get the ball wide early, and used Trippier to stand in advanced areas and send crosses into the box.

As an aside, I would add that none of Spurs’ three goals came from Trippier crosses, and indeed the opener came on one of the rare occasions that Trippier opted *not* to cross and instead played a clever, chipped pass into the corner of the box for Eriksen who was able to make a cut-back. That said, we did score from a wonderful Aurier cross against Newcastle. Personally I am of the belief that crossing is an inefficient route to goal and would rather we dropped our cross volume by at least 50%, but thats a blog for another day.

Spurs’ two three-man midfields have probably come from necessity. Aside from Dier, none of our first choice central midfielders are fully fit, with Victor Wanyama just resuming training, Harry Winks building up fitness after a lengthy lay-off, and key man Mousa Dembele not quite ready post-World Cup.

But in both matches, as Nathan A Clark points out in his latest article for RealSport, Spurs have been reliant on Dembele’s 20-odd minute cameos to reassert dominance after briefly wavering.

Pochettino has yet to find the perfect balance without Dembele, and that was particularly evident in the second half against Fulham, where the press of their physically dominant midfield became a problem, and Dembele became an essential change. This will lead to an interesting selection dilemma against Manchester United, which I will return to shortly.

But in Nathan’s article he also makes the point that Spurs’ midfields have both been borrowed from World Cup teams – the Newcastle shape from Didier Deschamps’ France, and the Fulham shape from Gareth Southgate’s England. With the latter, we can take this a step further as there are many similarities and it is useful to highlight them.

There are some obvious differences: England would kill for a player like Eriksen, and Ashley Young is more cross-heavy than Ben Davies, but there are plenty of similarities, and this is something to keep an eye on as the season progresses. Lucas Moura played ‘the Raheem Sterling role’ remarkably well against Fulham, pressing with an intensity that will have caught Pochettino’s eye, but also being willing to vary his play, one moment running in behind and stretching play, the next dropping short and using his quick feet to get himself out of tight spaces. Jan Vertonghen is a close match for Harry Maguire in terms of carrying the ball from the back, and though Davinson Sanchez is not as good as John Stones in possession, they both tidy up effectively in different ways.

The approach to the Manchester United match may see a further change in shape. United have approached both of their matches with Andreas Pereira as their deepest-lying midfielder, Fred to his right and Paul Pogba to his left. Fred in particular has disappointed and I suspect that if either Nemanja Matic or Ander Herrera are fit and able to play one or both will come in (Herrera was on the bench against Brighton).

A midfield of Pogba, Matic and Herrera will concern Pochettino, and I think he will want to start a more naturally defensive-minded player alongside Dier to counter it. Dembele seems the most ready, but he has history with Pogba.

Slight flashback to 2016 when I noticed Pogba bully Dembele like few others ever had. He’s done it again today and Dembele is a bit rattled. It’s so rare to see him beaten physically. https://t.co/uZh6qkOgHr

Though Dembele had the better of Pogba in the league at Wembley last year, I have rarely seen any other midfielder have as much success as Pogba has in physically and mentally dominating him, particularly obvious in the league game at Old Trafford and the FA Cup Semi-Final.

My suspicion is that Dembele will come in with ‘revenge for the cup semi’ as motivation, as Spurs will fear being over-loaded in midfield. That creates a selection dilemma, with Pochettino probably needing to choose between Sanchez/Alderweireld and Lucas for who to rotate out. I would lean towards leaving out Sanchez, as the prospect of a fresh and confident Lucas running at United’s vulnerable centre-back pairing is one which excites. I think a diamond-ish midfield could be a nice compromise, but it would put pressure on Davies and Trippier to cover the flanks, which is a concern, neither being particularly naturally athletic or possessing ball-carrying ability.

Eriksen has had a quiet start to the season, looking far looser than usual in possession, but he will be a key man at Old Trafford if we are to play this shape, as he will be required to protect Trippier against the threat of United’s winger (be that Martial, Sanchez or AN Other) as well as be our chief playmaker. Having Lucas up with Kane may relieve some of that pressure, as it gives us an out-ball and an option in the channels.

Jose Mourinho has often had the upper hand on Pochettino, but early season form suggests that Spurs stand a good chance of some sort of result despite history pointing towards a home win. Though it would be just our luck if Mourinho stumbled into a balanced midfield after the Brighton disaster.