Analysis of the goal conceded against Shamrock Rovers (29/9)

Stephen Rice’s goal – Cudicini parries a firmly struck free kick from McCabe, a first time effort is slammed in low, and Rice deftly lifts it over the goalkeeper. 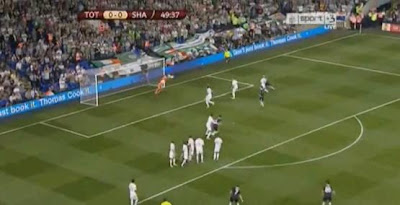 A McCabe free kick is curled to the far post – Cudicini gets two hands to it but, instead of putting it round the post, he parries it back out into the area. 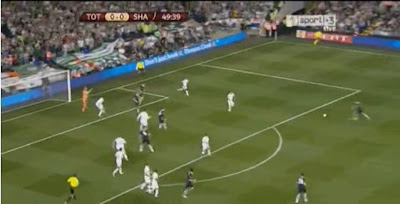 Twigg is running on to the ball at the edge of the box. Note Bassong’s position – he has neither pushed out to play off-side, nor tried to cover part of the goal line. Instead, he is playing the eventual goal-scorer onside and stood in Cudicini’s line of sight. 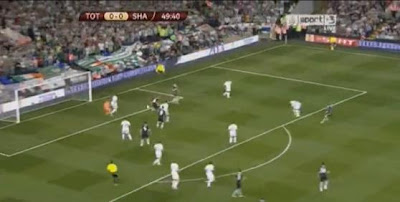 Twigg strikes the ball well, and the onside Rice gets a foot to his effort. 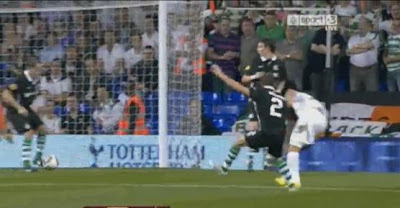 It’s quick thinking from Rice, who dinks the ball over Cudicini, who is left helpless.

Overall it was a good performance from a Spurs team which included ten changes from the line-up against Wigan (only Walker survived). We held the midfield well, with Livermore and Carroll constantly picking up loose balls and feeding our attacking players. Giovani was bright and creative, although did not always pick the right option, and Danny Rose was typically industrious from left back, making surge after surge forward.

The big disappointment in the first half was the performance of our strikers; Defoe, who barely got involved, and Pavlyuchenko, who wasted some good opportunities. In the second half, our forwards looked hungrier (although not always wiser), and we had a lot more cutting edge to our play, particularly after going one down. Townsend came on for Lennon and provided direct running and good deliveries, one of which created our opener.

I would expect nine or ten changes for Arsenal game, with Walker and possibly Defoe retaining places (although personally I’d stick with the team that beat Wigan last weekend).